Where should you go to learn about steaks and to eat some of the best? That would be Omaha, steak capital of the country. A group of writers visited virtually with Tracey McPherson of Visit Omaha and Omaha Steaks to learn about this most spectacular of entrées. All of the participants were sent some steaks of their choice by Omaha Steaks to prepare following the advice of three of the best chefs in Omaha’s restaurants,  V. Mertz, Kitchen Table, and Dante.

No story of steak and Omaha is complete without knowing the story of the well-known Omaha Steaks empire. The father and son team of J.J. & B.A. Simon opened their butcher shop called Table Supply Meat Company in 1917. It later became Omaha Steaks as they grew by forming partnerships across the country. Since the Union Railroad had a hub in Omaha, many of these steaks found their way into dining cars. In addition, trains that transported the troops prepared Omaha Steaks. This is how they grew name recognition. Mail order followed and made Omaha Steaks known around the world. The company is still family owned by the fifth generation of Simons.

How do I know which steak works the best for what I’m preparing? That has been a question I have pondered when picking out a type of steak. This question sent me to google to figure out the nuances of the different varieties of steaks.

There is what is described as the Holy Trinity of steaks—filet, strip, and ribeye. The filet is the safest cut of steak because no matter where you buy it, it will be tender. The most tender cuts of beef come from areas where there is the least amount of muscle being worked. The filet comes from the middle lower back area where there isn’t much movement. However, the filet will not have that big beefy flavor because it isn’t a very fat piece of meat, and fat is how steaks get a full flavor. That is also why bacon is sometimes wrapped around a filet. In addition, you will see filet in a Beef Wellington or with a sauce or demi-glace. It is best eaten rare or at least medium-rare.

The ribeye, on the other hand, is loaded with lots of fat marbling which brings out lots of flavor. Sometimes you will find a steak called a cap steak, a portion of the ribeye, that might be the best steak there is because it has lots of marbling and is from an area getting lots of muscle workout that provides a rich, beefy flavor. Ribeyes are great for the grill where you can get a smoky charred flavor. Another contender made of the ribeye is what is known as the tomahawk steak, a ribeye with a bone where the meat is cut away from a lot of the bone for a more pleasing appearance.

Then there is the strip steak which is also known as sirloin, the New York Strip, shell steak, and the Kansas City steak (where a bone is left in that cut.) This cut is a little more dense than the ribeye. The strip falls between the ribeye and the filet as far as flavor and tenderness and can be cooked, medium, medium-rare, or rare. It’s good on the grill, but probably works best in a cast-iron pan on high heat. The strip steak comes with external fat on the outer edge of the steak which works well in adding flavor, and at the end, the fat can be removed.

Cooking My Steak on the Grill

I chose to prepare ribeye steaks  two different ways. The first time, I prepared it in a cast-iron pan on the grill. I tempered my steak  (which means to bring it to room temperature) for about an hour after coating it with Diamond Crystal salt and a heavy coating of crushed peppercorns. Once the steak was tempered, I warmed the grill to about 600 degrees before putting the steak and pan (with a little vegetable oil and butter) on the grill with the lid down. I wanted to get the maximum carmelized sear on the outside of the steak. It was only necessary to leave the steak for abut two minutes on the first side and then one minute on the second side. My cut of steak was around ¾ inch thick. I am always leery of overcooking a steak, so I made sure to remove it quickly once it started searing well on both sides. After cooking, I let the steak rest for about five minutes to prevent the juices from escaping from the meat.

I love both Chimichurri Sauce and Romesco Sauce with my steak. I whipped up a large batch of each so that I could freeze a lot for later and served my steak with these two flavorful sauces alongside. Read my article about how to prepare the rich and smoky Romesco sauce at Rioja and Romesco, Two of the Best of Spain.

Cooking My Steak on the Stove

The second time I cooked my ribeye, I prepared it in a cast-iron pan on my gas range. I tempered the steak for about two hours. During the tempering phase, I sprinkled generously some Diamond Crystal salt on the steak and then heavily coated each side with ground black peppercorns. After the tempering time period, I heated the pan with some grapeseed oil (or you can use vegetable oil because both can withstand a very high temperature) along with about a tablespoon of butter.

The cast-iron pan needs to be heated to a high temperature before adding the steak so that the steak gets a wonderful carmelized sear on it. I learned that if your steak isn’t that thick (maybe ½ inch to ¾ inch) it will cook very quickly. It only needs to be on the first side for about 1 ½ minutes and then about a minute on the second side, just enough to get a heavy sear. I prefer a rare to medium-rare steak so this worked for me. After removing it from the stove, let it rest for about five minutes.

If it is a thicker cut, rest it for 10 minutes so that the exterior is at least as cool as the interior and then put it in a 450 degree oven for three to five minutes. Again, when the steak comes out, it needs to rest for at least five minutes. 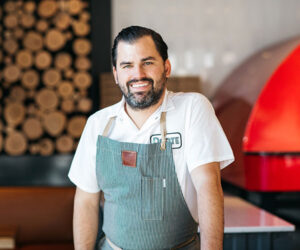 Chef Nick Strawhecher from Dante’s Restaurant in Omaha provided this wonderful recipe that is one of his favorites. He likes to make sandwiches because for a 20 ounce steak, you can get four sandwiches for $30, a great way to spread the joy.

Another wonderful and rich sauce to serve with your streak is to create Steak Au Poivre which literally means a pepper steak. The first time I had this delicious entrée was at a small French restaurant many years ago. The chef was good enough to share his recipe with me, and I am sharing it with you.

2 Tablespoons drained green peppercorns in brine (capers can be substituted)

Decide which cut of steak works for you and your preparation and then fire up that hot stove or grill and enjoy a great entrée.