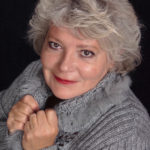 A native of Chicago, Ms. Thorsch has lived up and down the coast of California and currently resides in San Diego.

Ms. Thorsch has an eclectic background as a catering manager, worked in community relations, in the government, in public affairs, and as a realtor. She has over thirty years of experience in administration, marketing, fundraising and event planning. Because of her tireless work for those less fortunate in the community, the County Board of Supervisors in 2012 in her honor declared “Pamela Thorsch Day” in the County of San Diego.

In her spare time she enjoys cooking and entertaining, dabbling in various artistic expressions, traveling in third world countries, yoga and spending time with friends over a glass of wine and good food.

Recently, I found myself sitting in front of my computer with my face in my hands wanting to cut my head off in order to gain some sense of peace. I couldn’t concentrate, and my attention span was about 30 seconds. I couldn’t remember what I ate for breakfast, and I found myself at a very low ebb. Because I was about to turn 66, a friend wanted to arrange a birthday getaway, but nothing appealed to me. Then I remembered Vipassana, the silent meditation retreat I heard about during my travels in India. I had tried a number of times to register when I returned from my trip to India once I found that there are centers all over the world, but they were all booked months in advance.

It seems crazy that over 100,000 people a year voluntarily sit in a silent meditation retreat for 10 days, meditating from 4:30 a.m. until 7:30 p.m. followed by an hour discourse. There are no cell phones, no TVs, no music, no computers, no reading or writing, no talking or looking at another person, and eating simple vegetarian meals twice a day. But, they do.

The Founding of Vipassana

This is a true monk-style experience. “Vipassana,” meaning “to see things as they really are,” is one of India’s most ancient techniques of meditation. It was rediscovered by Gotama Buddha more than 2,500 years ago and taught by him as a universal remedy for universal ills, an “art of living.” This non-sectarian technique aims for the total eradication of mental impurities, resulting in experiencing the highest form of happiness, full liberation, and mental balance.

Over the centuries, the technique became diluted and non-effective; however, the only place it remained in pure form was in Burma. When, in 1955, Mr. S. N. Goenka, a successful Burmese businessman, started experiencing severe, debilitating migraines, he was unable to find medical relief. At the suggestion of a friend, he met with the Vipassana teacher, Sayagyi U Ba Khin, and completed a 10-day course. All migraine symptoms disappeared. He began training in the practice for 14 years and went on to dedicating the rest of his life in sharing Vipassana with millions of people. He expanded teachings while opening centers globally.

My Time Had Come

The closest Vipassana Center in Southern California where I was living is located in Twenty-Nine Palms in the middle of the desert. The idea of spending 10 days in 114-degree heat was not at all appealing, but I was desperate. I went online and filled out an application. By pure chance, I got onto a wait list that had just opened up for a mid-September retreat. There was no guarantee of getting in, but in my application I mentioned that my birthday was coming up and that sitting in silence on my birthday would be most auspicious. I asked for an earlier date if possible, and lo and behold, I received an email offering a spot in the August session. I had waited four years for this.

My First Experience at the Retreat

I approached the experience with no expectations, but I was excited to get started. Upon arrival and check-in, I was asked for my cell phone and keys to my car. I realized that once they got you to this point, you were committed. It is their way to help you through the process so that you don’t flee. The room was filled with both men and women of all ages and all nationalities. Altogether, there were approximately 80 people, including a disabled woman on a scooter and a pregnant woman who looked like she was going to give birth at any moment.

We started orientation. The organization is run mainly by a board of directors and volunteers who have previously attended a retreat. They have rules in place to adhere to, including a strict timetable you are expected to follow. Once the initial orientation was over, the men and women separated. We went into silence mode. We were not allowed to talk or look at anyone else unless it was meeting with an assistant teacher.

Spanish-style buildings spread over several acres. There is a main meditation hall and a cafeteria. The sandy walking paths curved around the property with well-maintained drought-tolerant plantings. Along these paths all I saw was the big open sky with no other distractions.

In my small, modest room, I had a single bed, lamp, alarm clock, a two-drawer chest, air conditioning, and a private bath. I was lucky because most had dormitory accommodations.

How I Learned to Meditate

Universally, the entire retreat is based on a recorded video course conducted by Mr. S. N. Goenka. Assistant teachers are in the room to support your process which becomes your personal inward journey. I was asked to close my eyes and focus my attention on my nostrils and the space just beneath my nostrils and to breathe. I was to only move if I felt it necessary. This simple yet powerful technique was one of the most challenging things I’ve ever done. For 10 days that’s all I did for 10 hours a day as I struggled as my mind wandered. I kept pulling it back, and my body would twitch and ache. Minutes felt like hours and hours like days, but I sat there to observe my breath.

As the process developed, other techniques were added. The main objective was to delve into the deep part of my subconscious mind and purge the negativity, fears, anger, and depression which shadowed my life.

The word equanimeous was used a lot throughout the course. Mr. Goenka explained that the idea is to achieve and maintain a sense of mental stability or equilibrium so that the good, the bad, and the neutral can all flow through me without unsettling me and without causing a reaction within me. It also means to not react negatively if I am not able to remain equanimeous. Rather than reacting, I was to simply learn how to act.

What Happened In My Meditation

Half way into this process, I began to see the patterns of my life which had been repeated over and over again. I saw the root cause of those patterns, when they initially developed, and why they developed. Tears rolled down my cheeks with the realizations. I wanted to go under the covers of my bed and stay in that safe place forever. I became physically, mentally, and emotionally drained.

I asked the assistant teacher if I could write down the experiences. She advised me against that idea. She told me that once these things emerge, you release them and move forward. Hopefully, you do not recreate them again. She explained that this was a process of peeling away layer by layer of these patterns.

There were a few more rough days. However, more attunement developed when I was asked to mentally scan my body from head to toe for hours on end. This technique is designed to make one aware of all energy. I was told that any action or movement that takes place begins on an energetic level.  This also applies to illnesses. If I became more attuned, my body would tell me that I was out of balance long before I heard a diagnosis in the doctor’s office. By becoming attuned to these fields, I could preempt the outcome of my actions as I recognize the impulses which are the triggers.

How I Felt at the End of My Stay

I sat in awe as I heard my heart beating and I could see inside my body. I merged into a golden light. Energies were spinning around me and purging outward. I liken it to a profound snap, crackle, and pop experience. By the end of the tenth day, I felt I had processed as much as I could handle for the moment. My mind had stopped wandering. I wasn’t thinking of the past or the future; I was just living in the now.

As I approached the end of the retreat, I was dreading that silence being broken by 40 women laughing and talking. Silence felt like a sacred space for me. Buddha described silence as an empty space, a space as the home of the awakened mind. I just wanted to hold onto what I had experienced.

I drove back slowly, wanting to savor living in the present and concerned that I would get distracted with all the noise and electronics our society generates.

How Much Does Vipassana Cost?

The center works entirely on donations. There is no set fee to participate. They feed you, shelter you, and instruct you for free. You pay what you can based on what you got out of it. What a noble approach.

It’s a direct experience you have within yourself which helps you gain a new perspective on life by eradicating old conditioning. By getting in touch with the deepest part of yourself and your own true nature, it is possible to develop self-control, awareness, and most importantly, inner peace. To learn about Vipassana and to apply to experience your own personal inward journey, go: www.dhamma.org.

2 thoughts on “Shh…Silence Please! My Journey to a Vipassana Meditation Retreat”