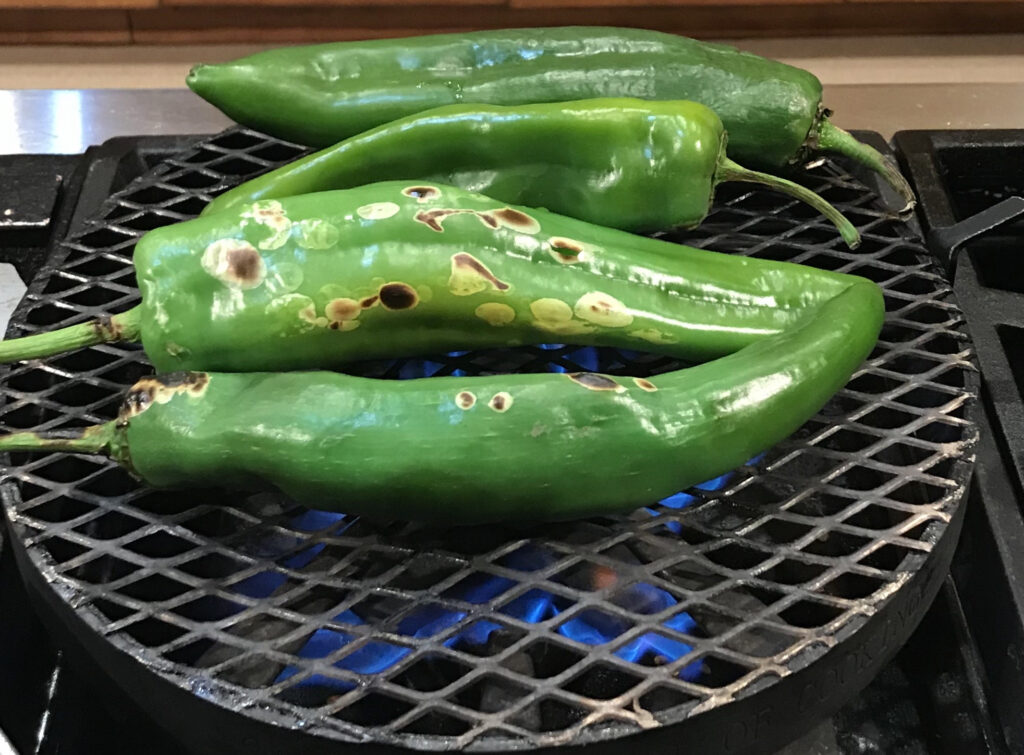 Bite into a jalapeno chile, and you know that was not a good idea. Chiles have always been a mystery to me, and a trip to New Mexico made me decide I needed to learn more about these bulb-shaped bits of spice.

Hatch chiles are a very big deal in New Mexico, but I had no idea what a hatch chile was. After doing a bit of research, I found out it is a generic name for New Mexico chiles that are grown and harvested in the Hatch Valley region of New Mexico. Hatch Valley is often referred to as the Chile Capital of the World. It is believed that these chiles taste very special because of the type of soil in this valley.

Today all chile pepper studies continue at the Chile Pepper Institute in New Mexico and have been developed from original roots crossed by Fabian Garcia in 1894. “Red or green” is New Mexico’s official state question which refers to the type of sauce you prefer made from chiles.

Is it “chile” and plural is “chiles” or is it “chili” and the plural is “chilies?” I’m going with “chile” in this article because that is how I was introduced to it in Santa Fe. Either spelling is correct, but “chile” is more often used as the Spanish spelling in Latin countries and “chili” is the American version.

Another bit of confusion is the use of the terms “chile” and “peppers.” They aren’t the same animal. The distinguishing factor between peppers and chiles is their associated genus in biological classification. Peppers and chili plants have two totally different geneses. A pepper is a member of the genus “Piper” while chiles are members of the genus “Capsicum.” The berries in plants of the Piper genus contain piperine, a chemical associated with a biting sensation. Members of the Capsicum genus have sufficient amounts of the chemical capsaicin, and create an even more noticeable burning or biting sensation. This oil is found in the membranes and seeds of the chile pepper.

What are Tomatillos—a Chile or a Pepper?

Tomatillos are small round fruits with a papery outer coating and are often used in Salsa Verde. However, they are considered part of the pepper family (the nightshade family) and not a chile. In Mexico they are often called tomato verde “green tomato.”

Chile heat is measured on a Scoville scale. Generally, the bigger a chile is and the lighter the color, the less hot it is. The Guero Chile is an exception because while it is a pale yellow color, it has quite a bit of heat to it. The following talks about different chiles from the mildest to the hottest. Brace yourself for a wide range of heat. 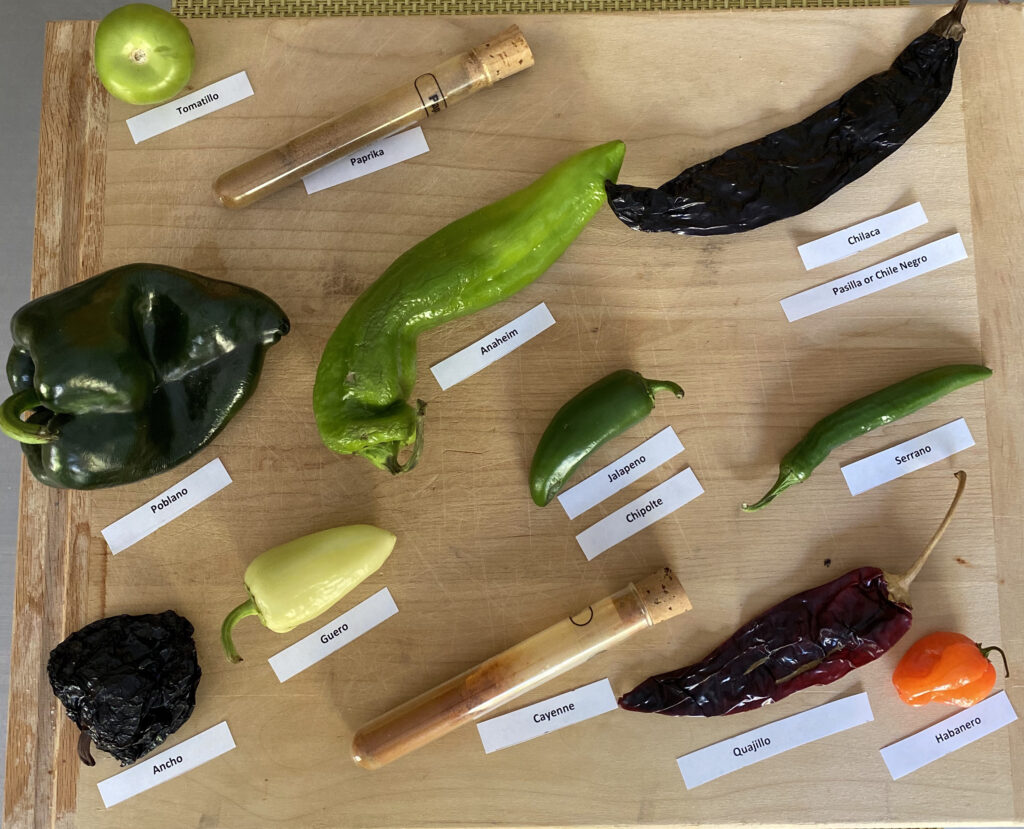 Paprika is a type of chile. In the United States you can only get it as a powder. It fits in the 50-200 Scoville scale.

The Poblano Chile is a very popular chile in both Mexico and Texas. It’s a great chile for stuffing and ranges from 500-2000 on Scoville. The hottest ones are more like a jalapeno, and you can’t tell the difference from appearance so be prepared for a little excitement sometimes.

A good way to prepare it is to roast it until charred on the outside, let it cool, peel it, and remove the seed pod inside. This chile isn’t juicy like a bell pepper and has more flavor when cooked. When dried, it becomes called an Ancho Chile and is used in sauces or stuffed. The Ancho Chile is sweet and fruity.

The Santa Fe Grande or Guero Chile ranges from 500-700 Scoville and are about 2 inches long and yellow but ripen to a deep red color. They are hot and slightly sweet flavored. They are often used in salsa as well as enchilada sauce. Two recipes I found online were for Chile Guero Asado Toreado and Shrimp Stuffed Chile Guero.

The Anaheim Chile (sometimes called California Chile) is another good one for stuffing. It ranges from 500-2500 Scoville.

The Chilaca Chile is often used in Mexican cuisine. The word “chilaca” means “gray hair” or “old” which depicts this bent and wrinkled chile. The Chilaca is long and curvy and may not be that plentiful in our markets but its dried form is becoming more available. When it is dried, it is called a Pasilla Chile or Chile Negro and is a part of the “Holy Trinity” of chiles. The Chilaca Chile ranks 1000-2500 Scoville. The Pasilla Chile is brown to black in color (unlike the Ancho chile which is more reddish brown but often labeled the same as the Pasilla) and is mildly hot with flavors of raisin and coffee. It contains both chlorophyll, that flavor you get with green peppers, and beta carotene, the flavor found in carrots. Many times it is used in meat dishes as well as savory ones.

Speaking of the “Holy Trinity” of chiles, the three chiles that comprise this group are the Pasilla Chile, the Ancho (dried Poblano,) and the Mulato (dried Poblano picked very ripe and has a moderate heat but still sweet with a bit of a smoky flavor.) The Mulato is the hottest member of the Holy Trinity. These are often used to make the traditional Mexican mole sauces.

The Quaquil Chile is often used in sauce making for Chile Rellenos (one of my favorites) as well as enchiladas. It’s range is 2500-5000 Scoville. 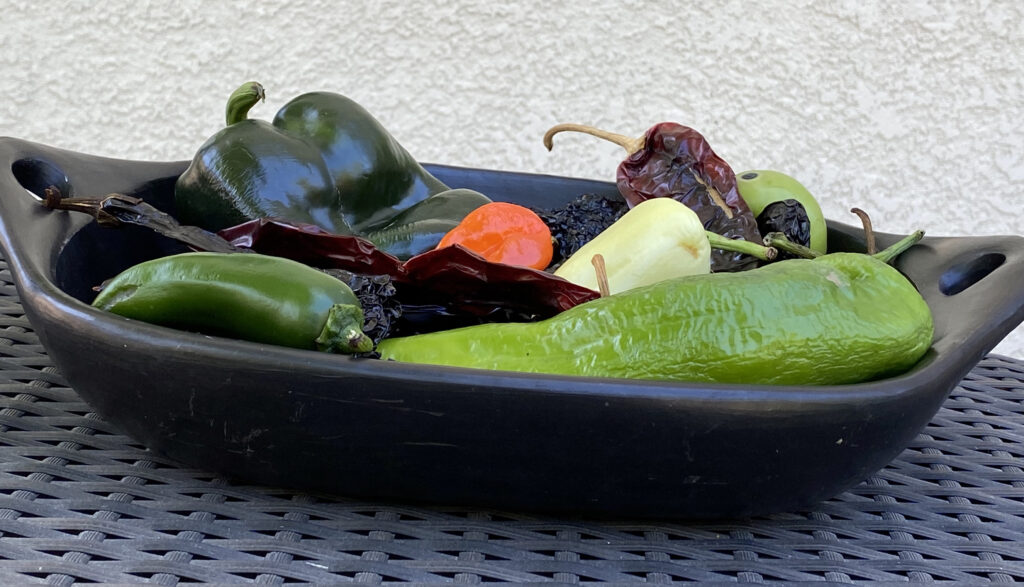 Moving on up that Scoville scale is the Jalapeno Chile, the most common chile found in the grocery store. My source says it has been bred to boredom. It’s ranking is 2500-8000 Scoville. When it is vine ripened to red and gets smoked, you have the wonderful Chipotle Chile with shades of sweetness and smokiness.

Chef Rick Bayless prefers the Serrano Chile to the Jalapeno because it has a drier flesh and that quintessential green chile intensity. It is about five times hotter than the Jalapeno. This skinny and curved chile ranks between 8000-22,000 Scoville.

Many of us have sprinkled a little Cayenne Pepper on pizza and have learned that a little goes a long way. It’s definitely on the hot side at 30,000-50,000 Scoville.

If you are in the Santa Fe area, a great way to learn about how to use chiles and to learn about a variety of dishes is to attend a cooking class at the Santa Fe School of Cooking. Check this wonderful school out online and look at some of their delicious recipes.

If you plan to cook at home, whatever way you work with chiles, make sure you handle them with gloves. That capsaicin oil sticks to your skin for a long time and isn’t pleasant if you happen to rub your eyes or anywhere else on your face.

Add some spice to your life by experimenting with a wide variety of chiles and figure out your favorite mix of chiles to make some amazing dishes. The Holy Trinity might be a good place to start,

2 thoughts on “Take the Bite Out of The Chile Mystery”